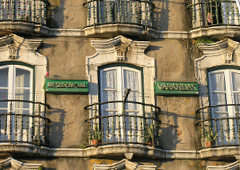 My first introduction to Lisbon, and indeed Portugal, came from the view from my hotel near the Parque Eduardo VII and just off the city’s main thoroughfare, Avenida da Liberdade. Stretched out before me was Lisbon’s old-city, with the Castle of São Jorge standing proudly on a crest to the right and the Tagus river arching out toward the Atlantic to the left.

Not wanting to linger in my room, I set out to Parque das Nações (Park of the Nations), a collection of museums, cultural monuments and shopping malls built for the 1998 World Expo. My ultimate destination was the Oceanário de Lisboa (Lisbon Aquarium). The center-piece of the 98 Expo, the aquarium is beautifully designed, engaging and not to be missed. A vast central tank houses a grand diversity of sea life while each corner of the building features a different aquatic habitat: from entertaining penguins to charming North American otters to striking tropical fish. 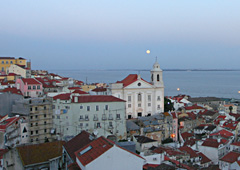 The next day was spent in blissful aimlessness as I wandered the streets of the city. Although parts Lisbon were rebuilt on a strict grid after the devastating 1755 earthquake, most of the lower town’s old streets and alleys still meander their way to the river. It is easy to get lost here. It is a pleasure to get lost here, amid the fluttering laundry and small cafés tucked into each corner. Despite the electric lights and occasional café television (always tuned to Portuguese football), little imagination is needed to feel the pulse of centuries old Lisbon. Majestic cathedrals and cloistered monasteries were among the many sights. As night descended and a full moon rose above the city, I sat above Alfama and the Tagus River and enjoyed the cool evening air. 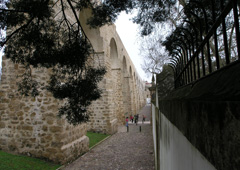 As the cool morning dawned, I set off for Coimbra, home to the oldest university in Portugal and one of the oldest in the world. Departing from Lisbon’s striking Gare do Oriente station, I settled in for the quick ride north. Situated upon a hill, overlooking the Mondego river, old Coimbra is a warren of small steep side streets punctuated by renaissance-style cathedrals and ornate university buildings. A Romanesque aqueduct bisects the old-town. Quixotically, many of the university’s central buildings were built in the 1960’s, in an unadorned brutalist style. It is easy to see why Coimbra is called the “cidade dos estudantes” (city of the students). One can see the university’s students, in their unique dark uniforms, throughout the city. Their colourful multi-lingual graffiti scrawled on ancient walls is similarly omnipresent. 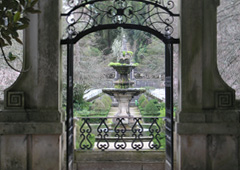 The highlight of Coimbra for me is the Jardim Botânico da Universidade de Coimbra, which date from the 18th century. Sprawling 13 hectares, the gardens are a mystical collection of wide stone-hewn paths, graceful iron gates and moss-covered fountains. This is the garden of fairy tales and children’s story books, where monsters creep and faun’s hide in the shadows.

My only night in Coimbra was spent at the Astória, a turn of the century hotel on the banks of the Mondego River. Its well-worn iron and glass-lined elevator and luxuriant smoking lounge harkened back to a long passed era. The tired décor, antique electronics and ubiquitous exposed compact fluorescents bulbs were reminders of a more modern era. While charming and worth a night for the sheer novelty, the Astória was long-past its prime. The restaurant’s food, in contrast, is not to be faulted and ranks as one of the most satisfying meals from my time in Portugal.

Read the Portugal Travel Log: Part 2, Porto and the return to Lisbon The majestic Douro river, sweet Port wine and the historic sights of Lisbon